“All there is at the end is theory, art having finally become vaporized in a dazzle of pure thought about itself, and remaining, as it were, solely as the object of its own theoretical consciousness.”

-Arthur Danto, The Death of Art

Arthur Danto wrote the eulogy for Art in 1984. Coincidentally this wasn’t long before Campagnolo stopped producing their famed polished silver components, so maybe he was on to something…I’m kidding, of course. But this is a serious discussion in the cycling world. Critics (or curmudgeons) would have you believe that bicycles and their components used to be works of art. They’ll tell you modern bikes lack the elegance or craftsmanship of their predecessors, or that carbon fiber and electronic shifting are hollow, soulless features. But I'm not so sure.

Danto’s post-mortem declaration is based on the premise that as works of art are documented, enshrined into museums and compartmentalized into “ism’s”, they begin to influence the aesthetics and style of would-be artmakers. This in turn confines their work within a rigid philosophy of what art can actually be, which then stifles and suffocates their ability to produce pieces of historical significance. Essentially, the would-be artmaker becomes unable to manifest their own truly original work, and instead operates solely in the realm of theory. Take for instance the Brillo boxes of Andy Warhol:

“What in the end makes the difference between a Brillo box and a work of art consisting of a Brillo box is a certain theory of art,” Danto writes. “It is theory that takes it up into the world of art, and keeps it from collapsing into the real object which it is. [Warhol’s Brillo boxes] could not have been art fifty years ago. The world has to be ready for certain things, the artworld no less than the real one. It is the role of artistic theories, these days as always, to make the artworld, and art, possible”. 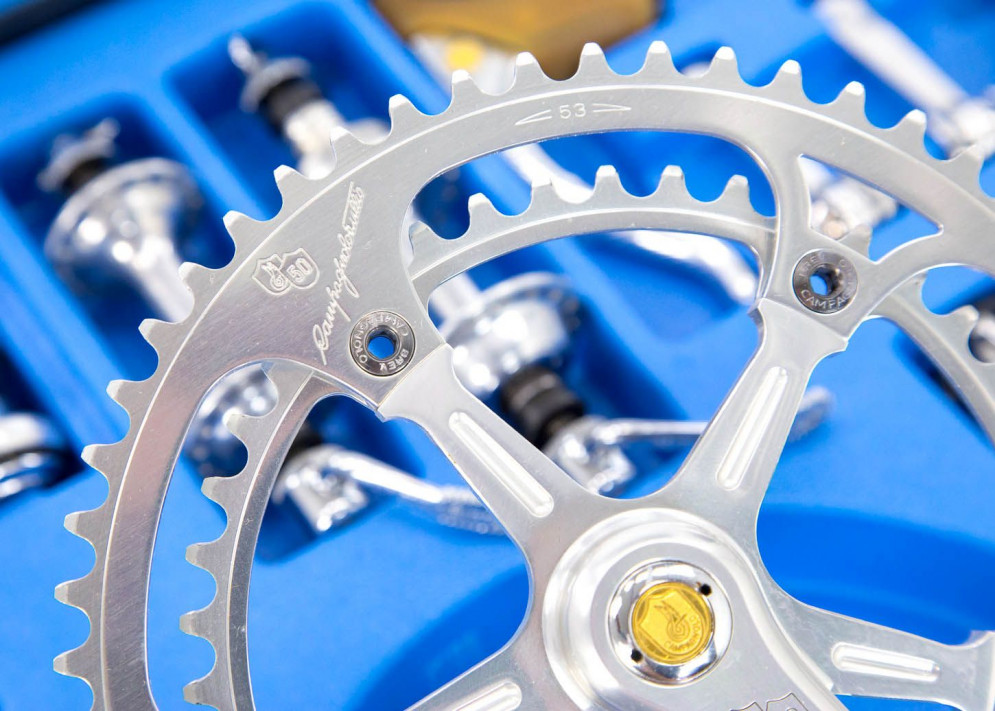 This got me to thinking about the bicycles and components of yesteryear that today are heralded as “art”. Were a pair of Campagnolo Delta brakes or a polished silver Super Record group art when they were first released to market? Or were they just well-made parts from passionate craftsmen until plasticky double-tap controls and the SRAM frog made people nostalgic for them? Is there something innately artistic about their design or construction or do we merely perceive them as such from our own modern vantage point? Is art really dead with regard to the modern bicycle, or is the world simply not ready for the new wave?

Consider the Specialized Aethos. The Aethos is a postmodernist rebuttal to critics of the modern bicycle. On the surface it’s not exactly what most cyclists would consider “art”. It’s completely inorganic. Nobody sat down and drafted the design by hand; it’s a so-called “data-monster” born from over 100,000 computer simulations. It’s disc-brake only. The frame has an understated look to it, with a compact front triangle and neither the heavily moulded tubes of its carbon compatriots or the classic silhouette of vintage steel. The S-Works models are constructed in a way that makes them compatible only with electronic drivetrains and all complete bikes, even those with accommodations for cables, are spec’ed with electronic groups. The whole project is a big middle finger to convention and Specialized make no qualms about that. 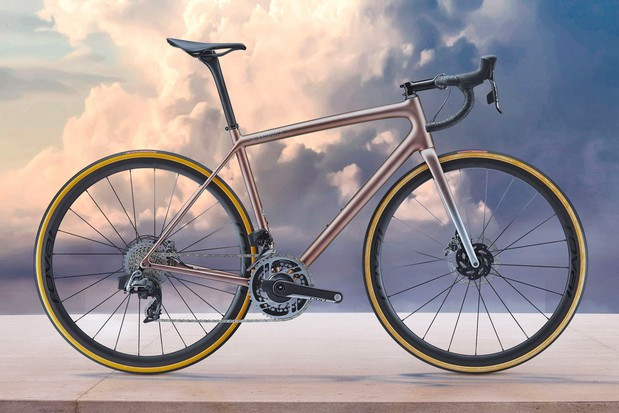 And why would they? This bike is that rare instance of something that’s as good as promised. It rides like the top choice of over 100,000 options (which it is), or the frame with the best measurables in test at the German Zedler Institute (which it also is). Its paradoxical properties could only have been conceived by a computer simulation, but believe me, the matrix is telling you this steak is delicious.

Everyone at Savile Road has spent some time on an Aethos and we all agree that this bike truly exhibits a uniquely dynamic ride quality. The chassis is noticeably stiff under power, and at well under a kilo for a frameset it races up gradients as if it were being winched. At the same time, the frame has a tranquil feel to it and isolates the rider from unpleasant road vibrations in a way that beckons you to ride longer and longer despite its racy geometry. Handling inputs are near instantaneous, as if the bike were paired to the rider by something akin to the Tesla Neuralink, yet it remains composed at speed like no bike this light has any business doing. I’ve ridden mine all over the double-digit grades and worn-out pavement of the Rensselaer Plateau during the past six months and haven’t found it lacking in any regard. With no loud colors and hardly any branding to speak of, this isn't a bike that shouts at the rider and passers by just how high performance it really is. But if you know where to look, the magic is hidden in plain sight. 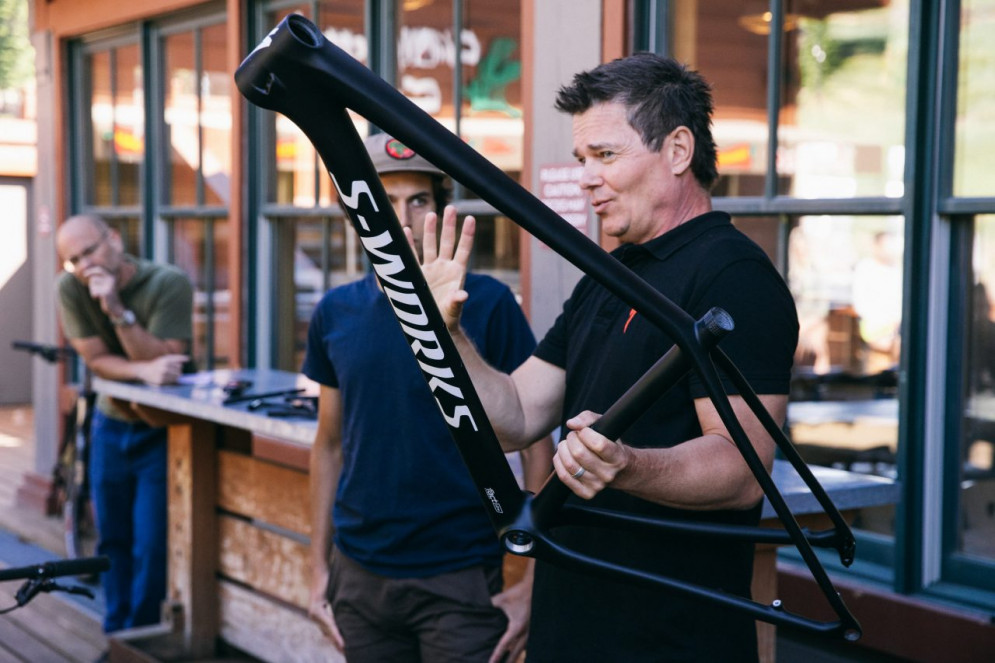 Peter Denk, Aethos lead engineer and carbon fiber savant developed a new theory while designing the bike: that shape, rather than mass or size is the primary variable in determining the ride characteristics of a frame. Carbon fiber offers nearly endless possibilities when it comes to tube shape, but until now designers have mostly treated it like alloy, with larger diameter tubes and more material being the go-to methods for increasing stiffness. Notably absent on the Aethos are the oversized downtube and bottom bracket areas we've become accustomed to. Instead, it employs subtle conical sections in the tubes to finetune frame stiffness. This provides not only the staccato acceleration and handling characteristics that carbon fiber frames are coveted for, but also a more balanced, stable and predictable transfer of these forces throughout the frame. It also allows for the removal of additional stiffness layers, resulting in the lightest production disc-brake frame on the market. This seemingly unremarkable design is quietly the most technically advanced bike that Specialized has ever produced.

Danto predicted that the art market, so reliant on perceived historical importance as a selling point, would require an "unending illusion of novelty" in order to sell recycled and repackaged aesthetics in lieu of the something genuinely new and significant, and admittedly we've seen this before in the cycling industry. Some product releases have felt a bit like Marcel Duchamp exhibiting a urinal as artwork, and all of the sub-niches within the industry invoke what Danto coined the post-historical period. "Of course, there will go on being art-making," he wrote, "But art-makers, living in what I like to call the post-historical period of art, will bring into existence works which lack the historical importance or meaning we have for a long time come to expect. The story comes to an end, but not the characters, who live on, happily ever after doing whatever they do in their post-narrational insignificance".

The Aethos, to me, is a tangible refutation to the idea that the grand narrative of progression--one movement reacting to another--has come to an end. As aerodynamics, cockpit integration, and speed at any cost became the definitive ethos of bicycle design, Specialized recognized the opportunity for a new movement: a high-performance bike for regular riders. One measured not by its drag coefficient or race palmares but by its capability and ride quality. Something unrelentingly modern, but unembellished--superlative, but simply for the sake of enjoyed. So is the Aethos the death of art? I think it's more of a Renaissance.